Mile #96 in honor of Kinsley 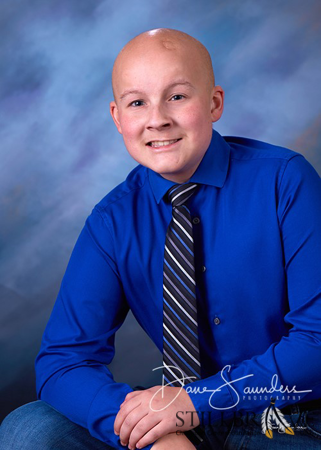 Kinsley is 8 years old, born on February 15th 2012 and was diagnosed at the age of 5 with Myxopapillary Epyndemoma, a type of cancer that lives within the Central nervous system. We first discovered the cancer shortly after leaving our native city of Centreville and moving to Charlotte, NC for work reasons. Kinsley was experiencing incontinence issues and severe pain in her back and legs that would not allow her to sleep for days. We were fighting with insurance to have needed MRI's approved and having no luck, the ER doctors were not helpful and they never admitted her no matter how many times I asked.
One day Kinsleys legs stopped working and we rushed her to the hospital where she was promptly admitted and given an MRI which revealed a Spinal tumor the size of a thumb. This was causing all of the pain/nerve damage and incontinence issues as the tumor was caught in a bundle of nerves within the spine, her bladder was unable to empty completely and was quite enlarged. Kinsley had surgery the following day, June 6th 2017 to have the tumor removed. It was a success and the doctors were confident that they removed all of the tumor and no regrowth would occur. They put her on an every 6 month MRI schedule to monitor. Kinsley healed remarkably from the surgery and felt so much better!
The first 6 month MRI after surgery was beautiful, no new tumors and showed minimal scarring. Fast forward a year to the day of her first surgery when she was given another MRI, June 6th 2018, we are now back in Northern VA and seeing Dr. Myseros with Children's Hospital, and another tumor was found in the same spot as the previous one. This meant another spinal surgery, Kinsley had surgery to remove this tumor at Children's Hospital in DC on July 3rd 2018 and we stayed for almost a week. At this time the doctors were concerned at the fact the tumor had come back and were contemplating if Radiation would be needed (Chemotherapy does not work on these types of tumors due to its mutation). Eventually the doctors decided that because of her age at the time, they would hold off on any treatment since the tumor was removed again completely but would now follow her VIA MRI every 3 months.
All was well for awhile but in March 2019 Kinsley started having very similar symptoms with her bladder and legs as before and lots of pain. We took Kinsley to Fairfax Hospital ER in March 2019, after explaining her history they decided to admit her and perform an MRI. The MRI revealed TWO more tumors in the spine, a little lower this time than before. Now was the time to schedule a THIRD surgery for the removal. Surgery was scheduled to take place at Children's on May 6th 2019. Before doing so, they sent Kinsley to Children's outpatient center in Frederick MD for a pre-op MRI. Tthis time they added the brain MRI portion on since this type of Cancer can occur in the brain as well. It was on May 3rd 2019 that our lives changed a little more than it had previously. The MRI went well, the nurse advised that the Doctor would call us with the results if anything needed to be discussed prior to surgery. Later that day, Dr. Jennifer Dean (Kinsley's oncologist) called us with news that slapped us in the face, HARD. Kinsley had a very small brain tumor as well. Not only did she have a brain tumor, but hers was adjacent to the carotid artery and inoperable, it was time for further treatment. The Doctors made the decision to not go through with surgery, it was clear that Kinsley had hundreds of microscopic cancer cells within the CNS that were not being removed with surgery alone, Radiation was needed.
Kinsley had a three day round of Cyberknife radiation at the new INOVA Schar Cancer institute in May 2019 strictly for the brain tumor. After that was completed came the bigger treatment, 7 weeks of Proton Radiation Therapy in Baltimore Maryland (Complete brain and spine). Kinsley's last day of Radiation Therapy was on July 18th 2019. She lost all of her hair and slept 22 hours a day for a LONG time. She is being followed very closely now and receives MRI scans every 3 months, and she will have chronic back pain/nerve pain for the rest of her life due to the surgeries she has had - there is nothing that can be done about that. Her hearing is a little off now as well as vision but she is DOING GREAT! She has had 3 MRIs since the radiation treatment, the first two were iffy as it showed some scarring and "grey areas" on the brain, the one that was just performed in January 2020 was STABLE!! Absolutely no change from the last one, woohoo! We are scheduled for an MRI in April and are keeping our fingers and toes crossed for good news,. She will not be considered "cancer free" until she has had 5 years of Stable MRIs. Our family would be very appreciative if Kinsley could be honored in this race. Please let me know if you need any further information, Thank you for listening.