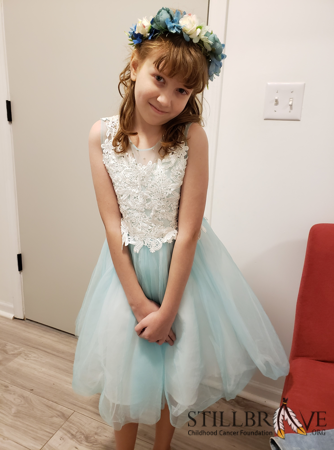 Mile #93 Caleb Caleb was love.He loved nothing more than being a good helper. It not only made his family happy, but he knew it made God happy and that was so very important to him, even before he started pre-school. He especially loved to help his dad in the garage with his tools and “mow” the lawn with his bubble making mower when his dad cut the grass. Caleb even washed his jeep when Dad washed the car.

Caleb was a smart, active, play wide open boy, until his head dripped in sweat. He loved football. In fact his first words were “touchdown” as the Cowboys scored a goal. Caleb was also a ladies man, even at 3 years old. He just loved females of all ages. He also loved books and learning new things.

So the summer of 2010 when he turned 5 was a most exciting one. He finally got to join a football team and was excited about starting his gifted bi-lingual school.

He missed a football practice d/t a headache. Kind of weird for a 5 year old to have a headache, but he was playing football, it was late summer and Texas is hot. I noticed his smile seemed asymmetrical in his pics from his 1st day of school, but Caleb was adopted, so I thought, hmmm, he’s going to have that lopsided grin that girls go crazy for. Maybe it’s genetic, maybe his biological father smiled like that too.

Caleb began having anxieties & crying fits going to school. This was very, very unusual for this outgoing kid. But it was an hour bus ride to school, so Mom asked for suggestions from friends how to soothe Caleb and read him ‘The Kissing Hand’ and gave him a kiss to carry with him throughout the day. This seemed to help. He LOVED his classmates & teacher.

Then about 6 weeks after starting kindergarten, Caleb fell off his chair at school one Friday. Not a big concern, he had so much energy it probably was hard to sit still so long. Or maybe he was just being silly. But that Sunday just as Sunday school was about to start, his teacher asked his mom “isn’t Caleb right-handed? Because he is coloring with only his left hand” that set alarm bells off and he was taking straight to the ER.

Unlike so many kids with cancer that are misdiagnosed and may spent months until getting the proper dx, Caleb was admitted that day and the next day we heard that horrible word DIPG. In 2005 there was only 1 treatment recommended and that was radiation. The same treatment Neil Armstrong’s 2 year old daughter Muffy was given for her DIPG in 1961.

By Christmas, Caden was proudly telling family members he “was retired from kindergarten”. Though he missed his friends, he liked the idea of being retired just like his grandpa that year. It broke my heart at Christmas time when Caleb was with his 5 year old cousin that he hadn’t seen in 2 years, but remembered well , and he felt embarrassed that his right hand wouldn’t work, slapping it with his left, saying “stupid steroids” . I didn’t think little kids could be self-conscious about their body at that age. Steroids are a necessary evil and made this sweet, loving boy angry & ravenously hungry and almost twice his weight. He knew it wasn’t him, but the steroids and at night would say “tomorrow will be a better day”.

He only had 5.5 months of tomorrows after his dx. Not even enough time to digest what was happening to him.

Caleb left behind a 3 year old brother, Caden, who even though he was in diapers and often sent to his beloved Gma’s to stay during treatment, Caden remembers his beloved big bother and misses him dearly. Almost 8 years later Caden is still dealing with the tragedy of losing his only sibling. Caleb loved his little brother Caden so and would often help his mom “take care of him”, even feeding him his bottle when younger.

Loved Forever to Infinity and Beyond