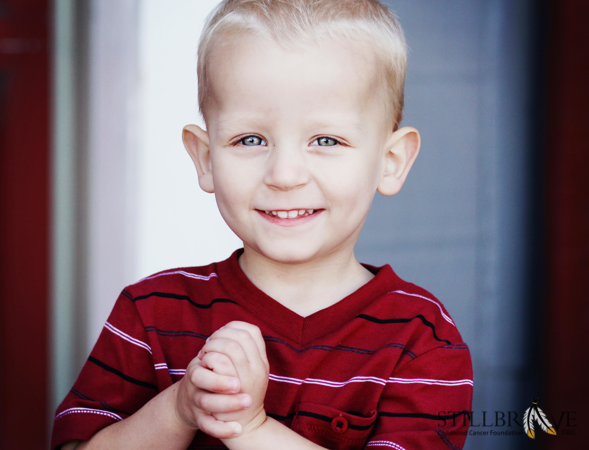 Caemon was a gorgeous little cherub born to two moms who wanted him more than anything in the world. He was clever, super smart, and utterly precocious. He loved cooking, listening to music like Van Morrison, Bob Marley, and the Lumineers, reading with his moms, hiking in the redwoods, and playing on beaches of northern California where he lived. In August of 2012, when Caemon was almost three, he was diagnosed with a very rare and aggressive type of leukemia, JMML. During his treatment which was almost entirely in-patient, Caemon became a nurse. He fell in love with all things medical, and his nurses at UCSF were his superheroes. Befriending his fears was Caemon’s own way of overcoming his fears around hospital life. He would snuggle with syringe pumps, name the syringes that took his blood, and play for hours with endless mountains of medical supplies his nurses brought him, even helping with some of his own procedures. Caemon also loved quirky kid things though. He would cover himself in weird tattoos like blenders, toasters, eyeballs, Edgar Allen Poe--and especially crocodiles because his name, Caemon, comes from a type of crocodile. For nearly six months, Caemon lived in the hospital, enduring aggressive chemotherapy and finally a bone marrow transplant. During transplant, Caemon opted to start going by the name “Croc” because he no longer felt like Caemon. This made him feel stronger, braver, as he faced this difficult treatment. But in the first few weeks of 2013, just 40 days after his transplant, we learned that Caemon’s JMML was back with a vengeance. In just ten days, this precious little boy was gone. In the last weeks leading up to his death, Croc’s wisdom was on display. Without knowing his prognosis, he asked all of his favorite people to lie in his bed with them. He taught a nurse to “never say not to a hug,” and he taught everyone around him to lead with love, not with fear. Caemon was a brilliant light loved by so many around the world, and he is missed by all he touched--especially his mothers. I would be honored if you would carry my boy, my brave little Croc, with you on this journey of yours. He loved seeing the world, and I know he would have been in awe of what you do.

I am so grateful you are carrying Alyson too. I miss her so very much.

With love and light,