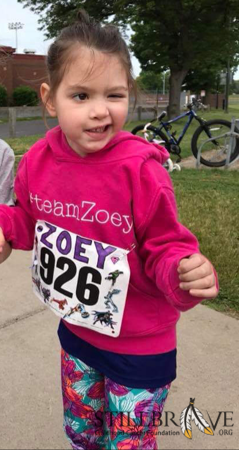 Dearest Tom and team, Words could never express the gratitude I have for you creating such an inspirational platform for our children. Thank you for remembering them, fighting beside them and for just ’doing’ when so many others don’t. I would love for Kai to be included again this year if possible. Wishing you the very best of luck and we’ll be cheering you on from here in Australia 🇦🇺 ❤️

Kai was diagnosed with Acute Myeloid Leukaemia on 25th March 2015 when he was 2-years-old. He was classed as ‘high risk’ after one round of intensive chemotherapy and spent the following 7 months in isolation. He had a Bone Marrow Transplant from an anonymous unrelated donor on 13th August 2015. Over the following weeks he grew stronger and finally came home in September 2015. He soaked up life filling it with laughter and sunshine for 11 months before we were hit with the devastating news his cancer had returned.

On 25th July 2016, he began three more grueling rounds of intensive chemotherapy. His baby brother who had been born before the end of his first transplant turned out to be a perfect match for him and his cord blood was collected and used for a second bone marrow transplant on 10th November 2017. As he recovered from his second transplant and prepared to come home, his cancer suddenly came back aggressively. Two days before Christmas 2016, we were told there were no other options available to him, no clinical trials, no chance of survival. We took him home to spend Christmas with his three brothers. Kai passed away in the arms of his mother, surrounded by his family, on 12th January 2017 three weeks before his 4th birthday. He took a piece of our hearts with him forever.