Mile #42 in honor of Maddie 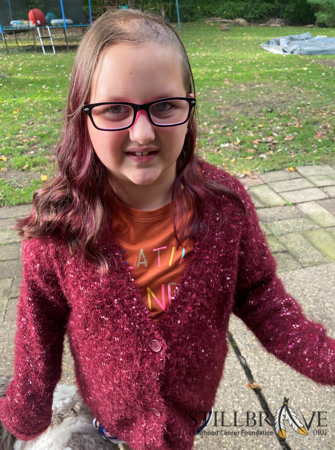 Madison was diagnosed in January 2011 with a rare form of brain cancer. It's called choroid plexus .She was the youngest dx there at only 4 months old.She had a total of 11 cycles of chemo all before she turned 1. To many MRI's, spinal taps and inpatient stays in that short 8 months.The drs put her in remission when she was 13 months old but still was getting spinal taps, MRI's every 3 months . But unfortunately after her 9 month scan her dr called and told us that she had relapsed with two new brain tumors. She immediately went in and had a port placed and began outpatient chemo. But Nothing was working and they wanted to send her home on hospice but that wasn’t an option !! so on September 11, 2013 she underwent another tumor removal and had a tumor marker test done and it came back with 4 different chemos/ meds that will hopefully get rid of her cancer/tumors. She started the treatment the end of September 2013 and she stopped treatment September 2017.It was a clinical trial .she got the news that she was NED in August 2019. She continues to get mris every 6 months . She battles everyday with side effects that chemo and the cancer has left her including a shunt in her brain that malfunctioned twice last year and had to endure two more Brain surgeries in 6 months. We just try to take one day at a time . She is 11 years old and. She is a true miracle !! She is now 2 years cancer Free.

Our motto .. Stay strong and never give up !!

Maddie did a clinical trial that saved her . Her drs have brought her case to other drs and hospitals all over the country . Here are a couple videos about what she was on.