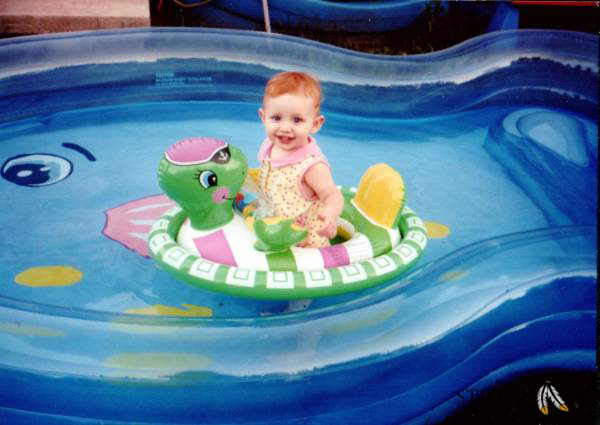 We were blessed on April 18 2000 with a beautiful baby girl LYRIC NICOLE OSBORN. She was our first. She was great. She was my best friend.

On August 22 2001 we took a trip to the emergency room because she wouldn't put pressure on her left leg. Sure enough it was broken an inch or so below the knee. So many questions were raised on how she might have done it. My husband and I worked our schedule out to where I worked 7am to 1:30pm got home by 2 and he was on his way out the door by 2:30pm to be at work by 3 so we wouldn't have to put her in daycare. We liked it because we both got to spend quality time with her all the time we never left her with anyone "strange" to her. Mommy and Daddy all the time. She seemed to love it. We have no stairs she wasn't a crawl up on the furniture type of kid so we never quite figured out why or how her leg broke. She got casted up and we went home with questions of "how" unanswered.

The next week on the 31st we went to the doctor for a check up on the cast. As I waited for him in the room I noticed Lyric's right leg looked a little swollen. He said her leg seems to be healing give her another 3 weeks and we can probably take it off. I asked him if her other leg looked funny to him at all being a doc maybe he could tell see since her other leg was casted it was hard to compare. He just said it looked like normal chubby baby foot nothing out of the ordinary. So we left. When I went to put her in the car I touched her foot and she winced it back like it hurt to touch.

I finally decided on my way home to take a detour to the ER once more because something just didn't seem right to me. I showed them her leg they remembered me from the week before so they were kind of light about the situation that I thought was a big deal! How can one day a healthy 16 month old go from great to one broken leg one swollen leg and a little low on the energy? The ER said the swollen right leg was a bug bite and they gave me some antibiotic and sent us on our way.

It was now the holiday weekend and Lyric was getting weaker and throwing up a few times a day. I wanted to take her to the Pediatrician but offices were closed until Tuesday. Up until Tuesday the 4th of September we just went to a family practice doctor and every checkup he said she was in great health. That is when I decided to call someone else.

When I took Lyric to see the pediatrician on the 4th it took her no more than 5-10 minutes and she was telling me she was going to admit Lyric to Children's Mercy Hospital and to go straight there she felt a "mass" in her left side belly. Fear set in very badly not knowing anything but "mass". Lyric and I went by picked up her daddy from work and went to the hospital.

We got there and they have the hospital setup in sections depending on the problem. They really didn't know anything yet so we just went into a room on the general population floor. They ran tests that night and before we went to bed they came in and told us it looked like her spleen was enlarged and that might be the problem. So we went to bed.

The next day they told us the docs would be in to talk to us. We waited and waited watching the floor docs go to everyone else’s room but ours. We were getting impatient by noonish and started demanding to see someone who could tell us something anything. Shortly after that a lady came in and sat us all down and said her spleen was not enlarged. She went on to say her mass was indeed a tumor and they needed to move us to the cancer ward and start doing tests to figure out what kind. By the late afternoon they were guessing it was Neuroblastoma. They ran more tests the next few days. On September 7th she was formally diagnosed with Stage 4 Neuroblastoma. They wanted to start treatment asap but first they needed to get her fluids and her blood cultures at a normal level. It wasn't until late Sunday night that they started the first round of chemo.

She was taking the chemo really well until her breathing was getting very bad Tuesday. Wednesday after a nurse took a blood gas test out of her wrist (she said normally all kids have to be basically held down and force them to handle it because it hurts so badly) Lyric just laid there and didn't move let the nurse do the needle test. The nurse said it was time to change something because she was getting too weak. Her trying to breathe on her own was taking all the energy she could muster up to just take a breath. They decided it was time to move her to the PICU now September 12th before it becomes an emergency move to the PICU. An organized move there was much easier on everyone. Once in the PICU Lyric was on a ventilator that was just on her mouth helping her breathe.

A few days later they told us the tumor was so huge it was taking over her lung capacity giving her only 20% or less and pushing on her bladder messing that all up. It was crushing a kidney. They said the best thing to do would be to put her on an oscillating ventilator to tide her over until the chemo started to show effects of it working. So she got 100% sedated on the 15th and now a machine was breathing for her to give her a break from doing all the work. It was supposed to be a good thing.

Day by day went by and her WBC count dropped to zero and it was supposed to do that. Now we were waiting for that count to recover. The whole time through this she had been getting blood transfusions platelet transfusions antibiotics for infections morphine lots of fluid on her she at one time was getting ten different things put into her all just trying to keep her stable until we start seeing effects of the chemo working. Her belly was 69 cm around and not looking like it was improving.

On Monday October 1st the doctors came in and said they did a sonogram and they found out the first round of chemo the most potent, strongest chemo they could possibly give her did nothing and the tumor was still growing. They gave us a choice that really wasn't a choice. They said they could try one more round of chemo but her body was too weak to handle it and would be making her suffer more than help her and she would die or we could talk about taking her off of the ventilator when we were ready because that was the only thing keeping her alive. So it was make her suffer and she passes or let her just pass with no more suffering. My husband and I went to bed that night discussing our options. We decided to let her go that next day.

October 2 2001 we let our baby go to Heaven with heavy hearts. She took her last breaths as my husband watched and I couldn't. We lost her at 11:10 am. It was the hardest thing I ever had to go through and I am still having trouble. Our 17 month old daughter gone but there is no more suffering. We decided we would not want be kept alive if the only reason was machines and we would want our daughter to do the same. Our daughter was the world to me and my husband. We miss her so much and I am just trying to convince myself she is better off where she is. But then I feel like I am being selfish because all I want is her here in my arms. A friend told me "it takes a lot of love to let go". I am trying to really deal with all this but it just isn't fair. The big ugly monster in my babies belly was just too big. It didn't even let her fight it away.

We learned a lot from her time here even though it was short.