Mile #31 in honor of Brendan 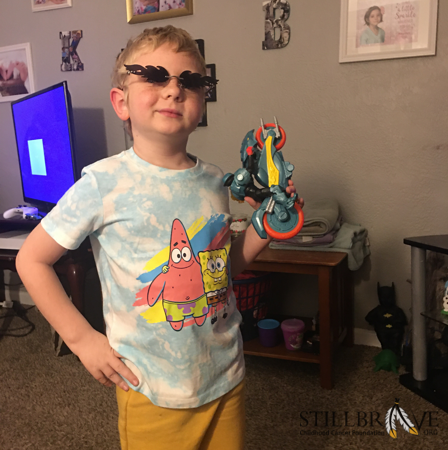 Brendan was 6 months old when we went to the hospital for overnight fluids because he was dehydrated from what our pediatrician believed was a virus. After less than an hour he began having seizures and was transferred to a bigger hospital. We found out within the first 12 hours of being admitted to the hospital that he had a tumor in the middle of his brain. We then began to fight for transfer To children’s Mercy Hospital in Kansas City. In Kansas City we we found out his final diagnosis which is PPTID(Pineal parenchymal tumor with intermediate Differentiation). At the time of diagnosis Brendan was seven months old. He went through three rounds of induction chemo, Resection surgery, and three rounds High-dose chemo witho stem cell rescue. He was tumor free for 21 months. They discovered a new tumor had grown During a routine MRI. He was three years old. This time would be more difficult to treat the tumor. We did two rounds of a chemo called ICE( ifosfamide, carboplatin and etoposide). After both rounds of ICE Brendan became very sick and septic. After the second round of ICE They did an MRI and found that the tumor had grown and we discontinued the chemo. We were searching for treatments and our Neuro

Oncologist suggested that we do another resection surgery. After the surgery we discovered that it had been mostly successful removing all the tumor except What was on the optic nerves, Veins and vessels. While we were still in the hospital recovering from the surgery a Neuro oncologist Came to us with an option to do proton radiation. We went to Oklahoma City to Procure clinic. Brendan did 30 proton radiation treatments over seven weeks. Brendan is now nine and has been off treatments for almost 6 years.
+ Read More