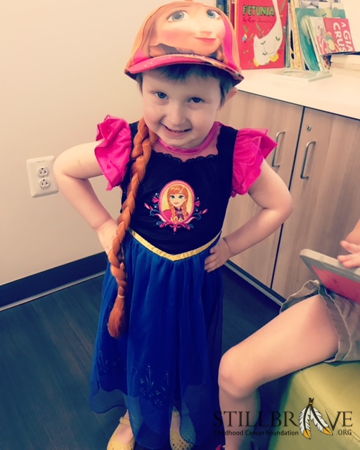 In October 2015, my husband and I had noticed that our two year old daughter Emily was beginning to have some facial paralysis. At first we thought she was just making a silly smile. Em was always a goofball. But after a few days of it slowly getting worse, we became concerned and took Emily to her pediatrician. The pediatrician suggested we take her to the neurologist to be seen to rule out any neurological issues. A few days later we saw the neurologist who then assessed Emily. After assessing Emily she said that she believed it was Bells Palsy and to keep an eye on it and that she would have Emily come back for an MRI in a month if her symptoms did not improve.Slowly we noticed that the paralysis got even worse and her face became a little swollen. She also started falling a lot and her balance was off. One day Emily woke up and wouldn't eat or drink and was very lethargic. I decided then that she needed to have an MRI immediately. I took her to the emergency room and they did multiple tests. They did a flu test, a strep test, etc. They all came back negative. Not satisfied with the test results I demanded to have an MRI done. They were not staffed to do an MRI at that moment so I settled for a CT scan. When they completed the scan, they saw a large mass on her brain. They immediately transported us to another hospital by ambulance. Emily underwent surgery on December 15th 2015 to remove her tumor and was diagnosed with Medduloblastoma. Emily also had some cancer spread to her spine. Emily received ten months of chemotherapy and six weeks of radiation. She was cancer free for 18 months. Unfortunately, Emily relapsed in August 2018. She received an additional six months of chemotherapy and an additional twelve weeks of radiation. Unfortunately her last round of chemotherapy and radiation did not work. She passed away on April 15, 2020. She is forever 6.Emily is so loved and so missed!