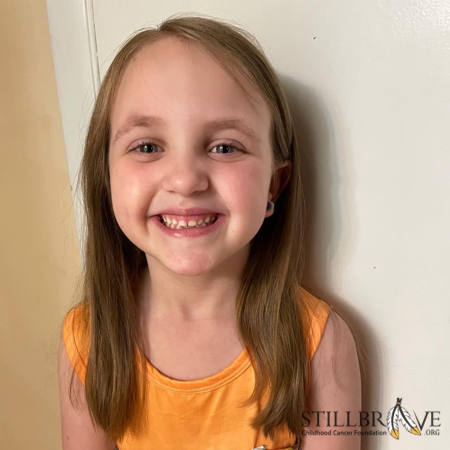 Abigail Kerns #abbystrong June 14th 2018 my little family's live changed forever. It started off as a normal day, I took my husband to work, and than my oldest daughter Abigail had a doctors appointment. So I had to take both my daughters with me. Abby's had stomach pain for a long time, the doctors always said it was anxiety. She's only 5. She'll be 6 in December. So I take the girls to Abby’s kindergarten physical, and I make the doctor look at Abby’s stomach, from there he tells me to go to another place for an ultrasound.

After that I am sent back to her doctors office, immediately, I am scared and alone and so are my girls. At the doctors office we are immediately placed in a room again to wait on the doctor. He comes in and ask me where my family is. Then he tells me Abigail might have CANCER. My world falls apart, I start to cry. the girls don’t understand, I call my husband, he breaks down while I'm on the phone and his boss drives him over. While I'm waiting on him, I call my sister, grandmother, and my adopted mom, and my dad. I broke their hearts. We were told we needed to go to Inova Children's hospital in Fairfax VA. My car wasn’t running right at the time. So my sister let us borrow hers while they kept my youngest daughter. We arrive at the hospital and they immediately start a line of fluids. And than the testing began. The next day the doctor asked my husband and I out of the room, my mom stayed behind with Abby. We were told she would need surgery immediately and that she has welms tumor, and they would need to remove her right kidney...


So they took Abby and me in an ambulance to Children's National Hospital in DC. Where they removed her right kidney and other tissues for more testing.  She starts chemo. She goes home, more chemos, and a few weeks later we fine out it's not just welms tumor, but its stage IV (4) anaplastic histology welms tumor and she has over 18 tumors in her lungs. Radiation had to start immediately. She has 13 days of radiation. And a more aggressive chemotherapy plan. She now could not go to kindergarten with her friends. She would be homebound. She completed her first cycle of chemo with little side effects and her doctors were amazed. She had 10 months of chemotherapy. We were in and out of the clinic and hospital. She missed so much. Now she has to catch up. At the end of treatment we did more scans and test and as of June 2019 Abby is in remission.
She still has a long way to go, but she kicked cancers ass!!! Abigail is so strong, she is everyone whom meets her, hero! She is a fighter!

We have 5 years to see if she will remain in remission and be cured, but she now only has one kidney and might need more medical treatment to make sure her one kidney remains strong. Abby might never have babies, and might have heart problems because radiation hit her heart and ovarian tubes. But she is strong and brave!!!

Abby is in first grade and takes special classes to help her catch up to her classmates, but bullying and hatefulness from other kids makes her hate school. We are pushing forward and helping her the best we can.