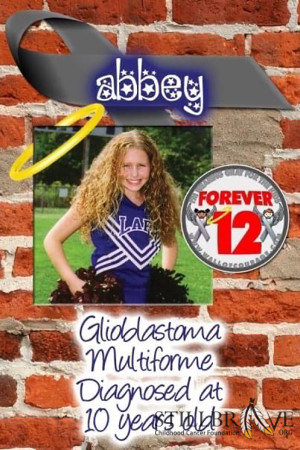 Abbey had a seizure on 12-26-04, within a week's time we found out she had a thalamic tumor which is considered by most doctors to be inoperable due to the location (mid brain).  Abbey was put on medication to stop the seizures and she was completely asymptomatic.

We were to wait and watch to see if her tumor would grow and then begin steps to save her life if the tumor were to change.

We found out in April of 2006 that Abbeys' tumor had begun to grow.  After many calls, tests unanswered calls and questions and lack of care from A.I. DuPont Children's Hospital we chose to move on to Children's Hospital of Philadelphia at the end of June.  We were under the care of Dr Jean Belasco Neuro Oncologist (we absolutely love her).  Our Neuro Surgeon was Dr. Leslie Sutton (pulls no punches).  On August 14th we began chemotherapy. On Sept. 14th Abbey had a port put in, making chemo just a tad easier on her.  They always had trouble with her veins.  The worst of the side effects would have been the soreness Abbey got in her mouth and jaw, this ended up being alleviated by taking Elavil.  We did learn to control the nausea rather quickly.  Abbey continued going to school 3days a week and went on to make honor roll taking all advanced classes throughout chemo. Not to be biased, but she was an extremely intelligent young lady.  On October 30th 2006 it was determined by an MRI that Abbeys' tumor had grown a bit.  Dr. Sutton had Abbey scheduled for a biopsy on November 21st 2006, to see if he could determine what type of tumor it was and perhaps find a more effective protocol for her.  Abbey was still completely without symptoms.
On Sunday November 19th 2006, Abbey had a wonderful day running around like your normal 12 year old.  She had been shopping and out to lunch with her Aunt Michele and had spent the rest of the afternoon at her best friend Rachel's house.  Abbey had gotten home around 5pm, she was joking around with some family friends, taking pictures, playing on the computer just being her silly self.  Shortly after everyone had left, I had gone downstairs to get the last load of laundry for the evening.  I can remember getting to the top of the steps and seeing her at the computer, and saying "hey baby" and I would always get a hi mommy back.  Took the laundry to my room to fold and put away.  In the middle of folding Abbey had called me from her cell phone saying she was in her bed and her head hurt.  Of course I went running.  Ed and I tried to get her calmed down, I thought initially she was having the beginning of a seizure.  However, after giving her Ativan and waiting a few minutes Abbey became very combative and screamed " don't touch me, I need to go to the hospital".  Ed immediately picked her up and off to the hospital we went (we live 1minute from Chester County Hospital in West Chester, Pa).  After getting a CT done it was determined Abbeys tumor had bleed within itself.  Abbey was airlifted to CHOP.  By the time we got there she was already in PICU and they were getting ready to do a bedside ventriculoscopy, and they had already had her on a breathing machine.  Abbey was posturing terribly.  I knew this was not good at all.  After thirteen heartbreaking days of trying to keep my baby comfortable she was gone.  She passed away on December 2nd, 2006 at 11:38pm, with me laying beside her holding her and breathing in her last breaths.  Her daddy was on the other side of her and her oldest sister Jackie at the foot of her bed being held by her boyfriend Mike.  We called our dear friend to go and pick up my daughter Gianna and youngest son Chris and bring them to the hospital to say goodbye to their sister.
Thank you All (Tom and the Stillbrave crew)
Abbeys Mommy
Renée
+ Read More