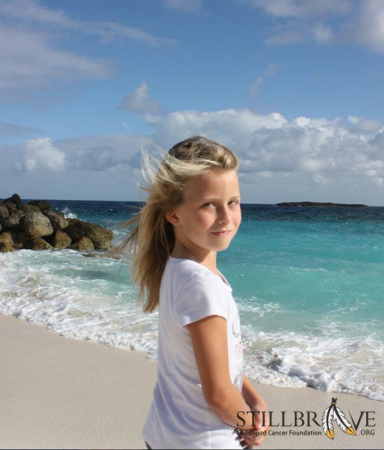 Kira Larissa Chandler was every bit of sweet and sassy an 8 year old could be. She had such sparkle in her personality, people were drawn to her by her adorable smile and bright blue eyes. Kira enjoyed the girly princess and at the same time would play Nerf with her brother. She loved water if it be at the pool, beach or lake. She was a watergirl. She liked to bake and do crafts. Our world was changed in an instant when Kira was diagnosed with a DIPG brain tumor at the tender age of 7 in February 2012. She kept her spunkiness the entire time. She was thrown into a fight for her life and she was fierce. Kira demanded to be awake during radiation and MRIs. She didn't like how she felt coming through after brain surgery. She had little say over most situations, but she proved doctors she was strong enough to be still for as long as needed. Kira endured so much and still kept a smile going. Kira would have down days but would get back up again. She had 30 rounds of radiation, tried 4 chemos, brain surgery, 12 MRIs, bone marrow aspiration and every kind of test. She went to 11 hospitals in and out of the country. Kira asked doctors if she could ride roller coasters before radiation. She tried her best not to let cancer determine her life. She is my inspiration. Kira is my hero for her strength and joyful spirit during such difficult times. She was taken by childhood cancer on March 28, 2013. Kira is missed beyond measure and loved for all eternity!!!!

Thank you for continuing the fight for our kids. Your support for them and their families is incredible. You make such a difference. I know Shayla is smiling at all you do! Kira will send some sparkle your way and shine down on you during the race!! STILL BRAVE!!