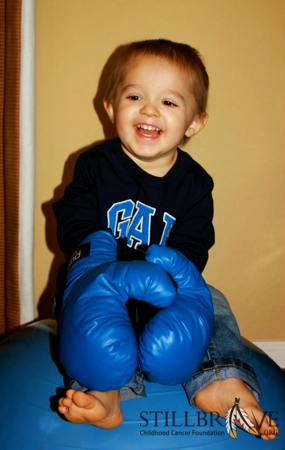 Our precious little Chloe was diagnosed with Stage 4 Wilms tumour in November 2012, when she was 5 years old.

Chloe had surgery to remove her right kidney and then had numerous rounds of gruelling chemo and radiation. After 7 months of treatment, it was decided that the 3 remaining cancer nodules in her lungs will be surgically removed, but only 1 was removed, and a further 3 rounds of intensive ICE followed.

After a year of treatment, Chloe’s bone marrow could no longer tolerate the treatment. One lung nodule remained and was surgically removed. We were told Chloe was in remission.

Three month scan was clear, but six month scan showed cancer back in her lungs. As relapse protocol had already been used Chloe was out of options. Then I found a protocol used in the UK. Even though success rate wasn’t great it was all she had left.

So we dove head first into chemo again. Initial scans showed improvement, but at the start of round 8 the wheels came off. Chloe was sick, was developing sepsis, and the cancer had spread to her bones. Now there was really nothing left.

After radiation to stunt the cancer in Chloe’s legs and hips, the femur head broke clean off. No more radiation.

Doctors felt they could improve Chloe’s quality of life by fixing the severed femur head. Surgery was a success. Unfortunately the surgery caused cancer cells to release and 3 weeks after the surgery she lived her last day.

On that last day my now 8 year old girl asked to watch her favourite movie, eat strawberries and drink tea with honey she left this world fighting death as bravely as she fought cancer.

Our beautiful talented amazing little girl was only 8 years, 2 months and 2 days old.

We miss her every moment of every day, and will do so forever.

With love and admiration for all you do
+ Read More