Mile #18 in honor of Ashlyn 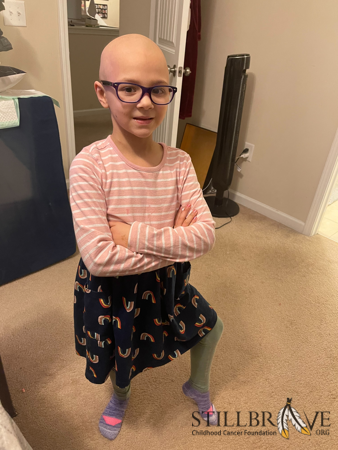 Ashlyn is an amazing girl.  She has kept a smile on her face and inspired so many people over the last year and half.  She is 5 years old and has been fighting a cancer diagnosis since May 15, 2020.

She was initially misdiagnosed and mistreated for the wrong type of cancer for over 2 months.  (She was originally told that she had a Wilms Tumor but after all the rounds of chemo, the tumor didn’t shrink, it grew.). It wasn’t until July 1, 2020 that we received the official diagnosis of Stage 4 high risk neuroblastoma.

Even though the odds were against her, In November, 2020, Ashlyn was declared to be NED, which means showing no evidence of disease.   She has to have scans done every 3 months and sadly, in September 2021, her scans showed that Ashlyn had relapsed.   She had several small spots in her left leg above her ankle.

She just completed round 4 of her treatment plan, which includes chemo, radiation, and immunotherapy to get rid of the cancer in her leg and hopefully the rest of her body so she can be free of cancer once and for all.

Ashlyn’s strength, courage, joy, and Hope are inspiring to all who know her and love her.  We have seen her endure more than any of us ever will.  We will never give up fighting for her, supporting her, loving her, and praying for her, as well as her family.

I have also attached some of my favorite photos.

Thank you so much,