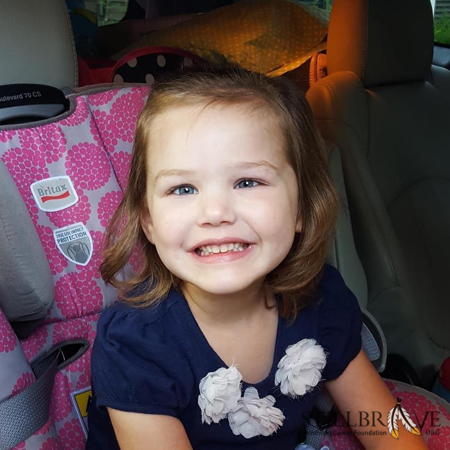 Hi,
My name is Samantha Posey and this is my 6 year old daughter Brynlee. She was diagnosed at five months old with Stage 2 Neuroblastoma. She had a surgery for swollen lymph nodes in two hours into her surgery they found a tumor wrapped around her sympathetic nerve. At that time they had to either cut her vocal cord or her sympathetic nerve which they of course cut her sympathetic nerve which now she has Horner syndrome. She had a 10% chance of her tumor coming back and six weeks later we went in for scans and they found a great sign of tumors on her neck. Do you two more tumors she had to do 8 rounds of chemo. She started losing her hair after the first round of chemo, so my husband and I decided to just shave her head. We got her some cute little beanies for her to wear so that she wasn’t always walking around with a bald head, but she sure did look beautiful with that bald head there was no shame! On Halloween that was her last day of chemo, and then she was going to have scans a month later. We have the scans her oncologist was not a hunter percent sure of the cancer was gone so we asked if we could go to New York for a second opinion. That January we went to New York, and found out our daughter was in remission she had no evidence of any disease! She has lived a very wonderful life, she is a daredevil, she is super smart and just all-around amazing! She has 5 older siblings and a labradoodle! She loves to play outside, play fortnite and dance!

Thank you for all that you do to support this cause. My husband and I didn’t know anything about childhood cancer until our daughter was diagnosed. It was horrible, we met other children that didn’t have such a good chance like my daughter had and I pray for those families every day. We are blessed to still have her and we cherish every moment we get. Spreading the awareness is so important to us! You guys are amazing and thank you so much for doing what you do!
Thanks,
Samantha
+ Read More