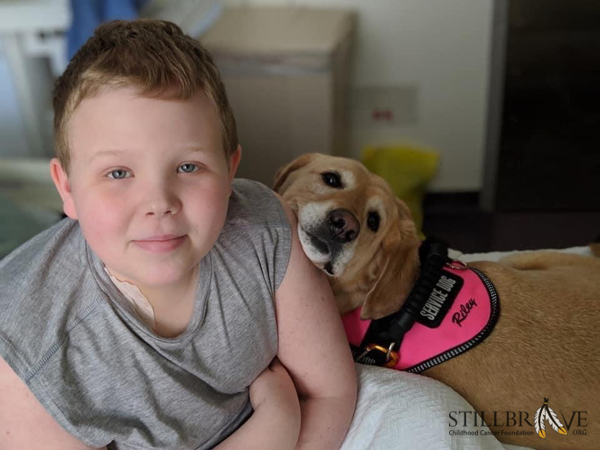 Ronan Smyth February 12, 2006 - May 5, 2019
Ronan was a highly athletic healthy 12-year-old boy living in Edmonton Alberta Canada. On July 16th 2018, Ronan reported numbness in his face the size of a loonie. A few days later it had spread significantly. Then his left eye started watering, he had headaches, nausea, no balance and his head was tilted. On July 30th a CT scan confirmed a tumor and on August 1st an MRI confirmed the deadly diagnosis of a DIPG tumor.

We were told it was a rare terminal tumor and that currently nowhere in the world has anyone had any success with treating and curing it. We discussed with Ronan and we all felt it was worth trying radiation in the hopes he would gain some time with fewer symptoms. He tolerated RT so well. He lost his hair around his ears and suffered burns to his ears towards the end. But other than that no ill side effects occurred. Sadly the genetic markers confirmed that his tumor was the most aggressive and the least likely to respond to RT. We continued with hope and started a “crazy list” with Ronan. From the date of diagnosis, we wasted no time in crossing off items on his list. The first was to skydive. Ronan and his dad jumped out of a “perfectly good airplane” as Ronan so proudly announced. I watched from the ground as my child soared in the clouds. I could hear him laughing and screaming as he jumped 10,000 Ft above me - completely free for a few moments. Ronan did a lot of things on his crazy list and he touched so many people. He got to meet Drake and his idol Carey Price the goalie for the Montreal Canadiens. He sadly never responded to radiation, it bought us time as he didn’t get worse over the treatment period but he never improved. He never regained his balance. He was never able to ride his bike, strap on his goalie pads, nor snowboard. He wished and prayed that he could do those three things more than anything. In order to keep Ronans ability to see, hear and swallow we sadly had to keep increasing the steroids that kept his brain swelling down. But those steroids came with some very ugly downsides. Ronan quickly developed the widening jaw and cheeks, he gained weight, he craved food, he found sleeping hard. He so hated what the steroid did to him. It crushed his soul a little. As hard as we tried we were never able to wean Ronan off the steroids. We instead had to continue to add meds to counteract all the other side effects. The next blow came right before Christmas. He developed compound spinal fractures. The pain to move became unbearable.

Ronan rallied for Christmas and New Years and we had a wonderful few days. Ronan took a turn on New Year’s Day and from that day forward he was unable to weight bear and walk. We became housebound and his back pain became too much for him. We added more pain meds. He rallied once again to make his 13th Birthday in February. The day after his birthday he further declined. We had to start a midazolam infusion. With pure determination Ronan lasted 10 weeks on the infusion. Nothing was easy in those 10 weeks. He remained a charmer, a jokester, a foodie, a friend and a brother. His little brother had his double digit (10th) birthday in early April. Again Ronan defied all odds and celebrated the day with us. From that day onward life became very hard. He started to have psychotic episodes that were so distressing. At this point he clearly stated that he was done. He wanted to go to heaven. He was tired and not scared to die. Living scared him more. He got weaker and weaker. His skin thinner and thinner. His eyes no longer worked great, he was almost deaf in both ears and his swallowing had become risky. He could no longer read, write, draw, hold his phone, play video games, listen to music, watch a movie. He was trapped in a body that was so broken but his internal organs were strong. He had been at home, cared for by us as going to a hospital would have crushed his spirt a long time ago. Ronan took us last breath on May 5, 2019 which happened to be “International Bereaved Mother’s Day”. DIPG shows no mercy and it takes so much from our kids so quickly. Ronan was an outlier in the age category. Being 13 and knowing that you are going to die but you just don’t know when. You have been told the avg time is 9 months -he survived the avg. He has taught us so much that I am not sure I will ever be able to express it all. Every day was marked with love and living. Even in his worst moments, he said please and thank you. He gently asked for hugs, made us laugh and showed us determination/resilience. He was kind, gentle and so very special. This world will never be complete without him in it. #smitty31 #ourherowearsniceshoes #DIPGWARRIOR #DIPGangel #inspiredbyronan

Love you too sweet Ronan - Mom, Dad, Aidan and your puppy Hero