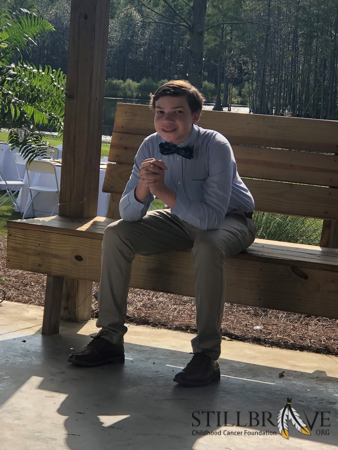 In December 2015, at just 8 years old, the life Connor knew was suddenly changed.  He faced a world of unknowns that consisted of Hospitals, Surgeries, MRI’s, Needles, Medicines (that seem endless and always make him sick), therapies and a constant schedule of things he didn’t like.

For about three months, Connor had been sick off and on.  It started with the occasional headache or call home from school with vomiting.   It progressively got worse.  Everyone, from his pediatrician to ER doctors, said it was a virus.  At one point, we were even told he was having an inward reaction to the outward changes that had taken place in our family.  We were told that counselling would be beneficial for him in learning coping mechanisms to deal with our growing family.  Later, he then tested positive for H Pylori but couldn’t keep the medicine down to treat it nor the nausea medicine down to keep him from throwing up.  After months, we finally urged the doctor to admit him into the hospital for IV fluids and medicine to knock out whatever it was that was continuing to make him sick.  It was there, that during rounds the pediatrician noticed he was seemingly fine in the evenings but come morning he was having severe headaches, nausea and vomiting.  After reviewing his chart throughout the day, she had a suspicion of what it might be.  She called the hospital and scheduled an MRI.  Her suspicions rang true.  On December 17, 2015 at 4:43pm ( a date and time forever imprinted in my mind), we were told that Connor had a Tumor inside his brain, in the cerebellum.  It was causing Hydrocephalus and he needed to be transported to the nearest children’s hospital for surgery the next morning.

Throughout that night and into the early morning of 18th, we were informed of what all we were facing but we certainly weren’t prepared mentally for it.  We were told Connor’s surgery would take 5 hours, but it took nearly 14. Throughout those hours, their were many people on their knees praying for this precious boy.  After the surgery, the doctor came out to discuss his findings.  Praise be to God that the neurosurgeon was able to get every piece of that tumor.  His exact words were “I am pretty certain Connor has Medulloblastoma, I am also pretty certain that I removed all the tumor.  I removed tumor until I couldn’t decipher between brain and tumor”.  After a few days, pathology confirmed it was in fact Medulloblastoma.

The following morning, reality began to set in, and we quickly realized how grueling the recovery and the next 6 months to a year were going to be.  Connor had no control over his body.  When occupational and physical therapies came to sit him up he was limp.  Within the next few days he gained more control, but we realized that the left side of his body was just “there”.  He had lost movement and control of that during the tumor resection.  It was like having a newborn again – changing soiled diapers/undies, feeding, clothing, the sleeplessness, the lifting and carrying of your child, the story telling (mainly to help him remember and to stimulate his healing brain), and the nightly prayers. The fight in him to recover was tremendous.  He learned how to walk again, to feed and clothe himself and basically just about everything he could do before the tumor.  This boy had and still has more grit, grace and faith than anyone I have ever met.  One morning, while still in the hospital he said “Mom, what does by his stripes you will be healed mean”?  I asked him “why”?  He said, “well, all night long I kept hearing those words while I slept”.  I explained to him “that it refers to the punishment Jesus Christ suffered while taking all of our sins”.  It was then and many other times throughout this journey that I knew he’d be ok.  He still has a ways to go both physically and cognitively but he’s going to do life on his own terms with a fire that pray will always run wild.

It has been almost 5 years since this journey began.  Connor completed 30 days of full brain and spine radiation, followed by 6 months of inpatient chemotherapy.  He has handled accessing his port, IV’s and everything he has been dealt for that matter with so much courage.  I have learned that these cancer warriors have a love of life that is portrayed in all they do.  An inherent ability to have compassion and be empathetic for others.  As someone once told us, “They don’t let cancer rule their life it’s just a sidecar as they ride through it”.  Connor’s cancer journey will never be over.  Whether he is having follow up appointments, physical therapy (with his most favorite Mr. Daniel), scheduled quarterly MRI’s or being an advocate for others.  As a family, we will continue to help find a cure.  Until a cure is found for all types of cancer we will advocate.  Connors dream in life is to become a pediatric oncologist so he can help children who are going through the same things he has.  He always says, “what better person to help you, than someone who knows EXACTLY what your going through and how you feel”.  I pray he continues to make a difference in this world, but I pray that in the process a cure can be found.