Mile #83 in honor of Oliver 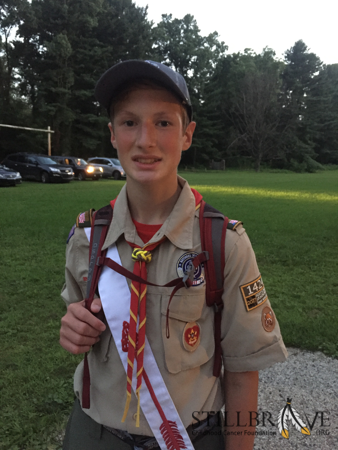 Hello Tattoo Tom and group,I met you in DC at CureFest.   My son Oliver Feldman was diagnosed with Osteosarcoma in April 2018 at age 16.   He was such a force!   He loved to be outdoors, he was in scouts, hiking, camping, bike riding, involved in music, robotics, and making a lot of art.  He was a great friend, and super funny.  He and his brother would prank each other particularly on April 1.  One year he froze all his brother's underwear.  He was also a huge animal lover and wanted to work in a zoo.

Oliver's main tumor was in his right humerus.   The plan was to do a limb salvage surgery and a week before they were to do the surgery his arm broke and instead they had to amputate his dominant arm.  It was so incredibly hard, but right away he started learning to do things with one hand.  He was even drawing and writing, putting on his socks (it is surprisingly hard to put on socks with one arm) and not letting it stop him.  Two weeks after he began school for his junior year, and halfway through his mainline treatment, they did a CT and were shocked that he had lung mets, including an inoperable one in his chest wall.  Oliver went on two different clinical trials, and we did any fun thing that he wanted to do during the time, hoping and praying they would work.   Very sadly they did not, and he died at home with his family and dogs in January 2019.   We continue to raise awareness of the disease and $ to go to research for osteosarcoma - a cancer whose treatment has not changed since the 1980s. We have a FB page for him called Oliver Rocks which includes painting rocks and traveling with them, leaving them all around the world.