Mile #70 in honor of Kaylee 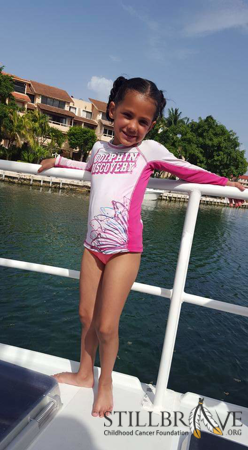 Kaylee was diagnosed on 2/1/18 (her 6th birthday) with a Stage 3 Wilms Tumor with diffuse anaplasia. Kaylee underwent surgery immediately after diagnosis to try and remove the 17cm tumor that was protruding out her abdomen. Due to high risk of bleeding out doctors were unable to remove it at that time and decided that a short round of chemo to try to shrink the tumor would make removal easier. Kaylee underwent 6 weeks of chemotherapy before her second surgery. The tumor didn’t shrink and doctors said they had no choice but to remove it which they did successfully. After removal of the tumor it was tested to make sure that the treatment plan Kaylee was on was the right one. The tumor came back as “bad cancer” and Kaylee was put on a 30 week regiment of aggressive chemo and 11 days of spot radiation. After numerous hospital stays throughout the year for neutropenia and fevers Kaylees last day of chemo was 10/22/18 and she was declared cancer free (in remission) on 11/1/18. Our precious girl survived 9 months of what we called Hell but she never lost her smile and continues to smile. She kept us strong and brave through it all. She has been an inspiration to many as during treatment she continued to be a normal 6 yr old the best she could. Attached are some pictures through her journey.