Mile #51 in honor of Alexandra 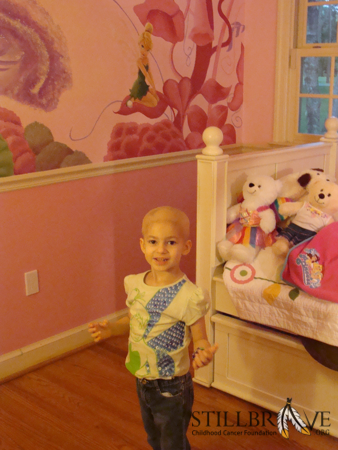 When my gentle and sweet Alexandra could barely speak, at 3 and half years old, our doctors couldn’t explain “why”. Then, one terrifying weekend, she started stumbling over a set of stairs that she had mastered many months earlier. She was whisked to the local emergency room on a Monday, and an MRI revealed a brain tumor. Then, we were sent in an ambulance to Children’s National Hospital, and on that same day, she began having trouble breathing. Neurosurgeons saved her life in that very moment by drilling a hole into her head to relieve intra-cranial pressure. It set the tone for the year ahead.

A few days later, she had surgery to remove the tumor. Our oncologist and neurologist then offered us enrolment into a novel clinical trial that included 6 chemotherapy cycles to delay radiation, which could devastate her small body. But after just 3 chemo cycles, we were force to move to 8 weeks of radiation, as the tumor grew and proved formidable. But significant tissue necrosis and tumor lesions appeared in her follow-up MRI, after radiation and the final 3 chemo cycles were completed.  She was a tough little spirit….but cancer would not stop.

Five weeks later, my beautiful Alexandra passed away in our home, in my arms. She was almost 5. One of our nurses accompanied her body to the autopsy because I was distraught about her being left alone, even though she was gone from this earth.

She is never forgotten, always loved by her parents and brother, Samuel.  She is forever my Squishy, my ‘Xandra, my little love.