Mile #4 in honor of Sierra 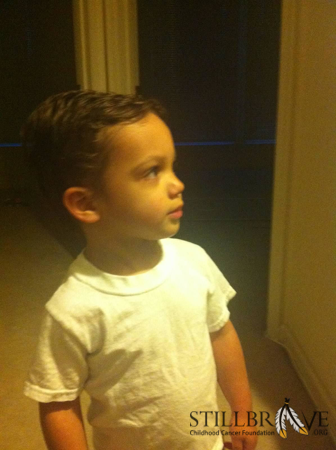 Tom, thank you very much. I have included a short bio and a long bio for you. Feel free to use either. Thank you again for remembering my Sierra.

Short Bio:
This is my daughter, Sierra Jean Harris. She was born with a Neuroblastoma tumor attached to her liver. At 3 days old we were informed she did have a cancerous tumor. She had a liver biopsy and bone marrow biopsy at 4 days old. She was officially diagnosed at 6 days old that it was Neuroblastoma. That was the same day she was placed on a ventilator that she never came off of. She received her first dose of chemo at 8 days old and radiation at 9 days old. She lived for only 20 short days. Every day suffering more than the day before. 2/27/99-3/19/99. I started a page on Facebook a few years ago in hopes to raise awareness about childhood cancer and that this horrible disease can attack at any age. Thank you for all you do to raise awareness for childhood Cancer and honoring our children. I will be with you in spirit cheering you on throughout the race

Long Bio:
On February 27, 1999 the most beautiful little girl in the world was born. My daughter, Sierra Jean Harris. My moment of pure joy almost instantly turned into sadness. Shortly after birth we knew something was just not right. Sierra's stomach was extended which is not normal. A scan of her stomach done at the hospital shown there was no masses. She was put on an antibiotic which helped, her stomach at birth was 37 cm and was down to 35cm. A few hours later she was transported to Kosair Children's Hospital in Louisville. What was so unique about her being born this day is that this is also my birthday. We shared the day.

2/28/99-I held my beautiful daughter for the first time. I held her in my arms most of the day. I did not want to put her down. She was perfect, she was so beautiful. The hospital stopped the antibiotic. Sierra had several vials of blood drawn.

3/1/99-When I came into her room she was receiving a blood transfusion through an iv in her head. Once that was complete I was able to hold her. It was the greatest feeling ever. Sierra had a body scan and more blood drawn.

3/2/99- I met with Dr. Patel for the first time and received the diagnosis that my precious daughter had cancer. She was born with a Neuroblastoma tumor attached to her liver.

3/3/99- Dr. Patel did a bone marrow biopsy and Sierra did great. That afternoon Dr. Fallot did a biopsy on her liver which did not go as well. Sierra lost over 100 cc's of blood which had to be pumped back into her. Her stomach was at a current measurement of 37cm.

3/4/99- When I walked into the hospital room that morning Sierra looked like a completely different child. Her stomach had expanded and was now 38cm. I stayed with her all day and did not want to leave.

3/5/99-The tumor was confirmed to be a Neuroblastoma. Her stomach had expanded more. She was now measuring 41 cm. My personal belief is when the air hit the tumor it caused growth but the doctors say that is not possible. Sierra began having problems breathing and was placed on a ventilator. Dr. Patel decided that we needed to begin chemotherapy. Her ph levels were not balanced so she began taking sodium bicarbonate to level them out.

3/6/99-Sierra's stomach was measuring 42 cm. Ph levels in her urine had not changed so she was given Tham instead of the sodium bicarbonate.

3/7/99-Stomach measurement was now at 43 cm. Sierra's levels were now correct and she received her first dose of chemo at 4:30 am. She received her second dose at 3:30 pm. I met a new doctor this day, Dr. Minor. She explained radiation to me and told me that my beautiful little girl only had about a 20% chance of survival. I was crushed. I didn't know what to say or what to do. This was the first time I had been given a chance of survival.

3/8/99-Sierra received her third dose of chemo and her first radiation treatment. Prior to radiation I met the radiation doctor, Dr. Paris. She gave me a lot of hope. She told me everything would be ok. She drew an outline of Sierra's liver and of the tumor on her belly. This would be the radiation location. Sierra's stomach was at 44cm. Seeing the outline was unreal.

3/9/99-Sierra's stomach was now at 48cm. She received her final dose of chemo and her 2nd dose of radiation. Her stomach just kept growing, nothing seemed to be working.

3/10/99-Yay, her stomach had went down 1/2cm. This was the first sign of hope. Sierra received her third radiation treatment. I was told that she had a 75% chance of survival with no cancer. Things had finally started going in the right direction.

3/11/99-Sierra's stomach was now at 49cm. I was crushed. Things were going back in the wrong direction.

3/12/99-Dr. Patel spoke with me and told me things did not look good. There was really nothing that could be done. I had Sierra baptised this day. Rev. Kelly Woggon performed the baptism.

3/13/99-Sierra's stomach was now measuring 50 cm. Looking at her was so hard. Her stomach was stretched so much and I could see the pain in her face.

3/14/99-Measurement was now at 51cm. She was retaining a lot of fluid. A new doctor, Dr. Tarentino came in to speak with me. He was taking the place of Dr. Patel. Things were not looking good at all. All I could do was hope for a miracle.

3/15/99-Sierra's stomach was still at 51cm. Dr. Tarentino decided a TAPP needed to be done to draw out some of the fluid.Her level dropped into the 60's, the ventilator was not helping like it should. We almost lost her. After the TAPP her o2 level was at 100. Her stomach was 49cm and they began to wean her off the ventilator. I thought I had gotten the miracle I was waiting for. By that evening her ventilator settings were back to the highest they could be and she began to have blood in her urine.

3/16/99-Her stomach measured 48 cm. This was going in the right direction but her ventilator settings were still maxed.

3/17/99- Sierra's stomach was still at 48cm. It had not grown. Throughout the day her ventilator settings went up and down. By the evening they were once again as high as they could be set to. Her stomach was not expanding but her breathing was worse and the blood in her urine wqas worse and she began having blood come from her tubes.

3/18/99-Sierra's stomach was 47cm. Her sats were in the 80's, she had a large amount of blood in her urine and coming from her tubes. She was also bleeding some from her mouth. I knew in my heart things were not going to turn around, I just did not want to accept it.

3/19/99- When I arrived at the hospital the front desk said the nurses were changing her meds so I could not go back. This had happened before so I did not think much of it at the time. After waiting for what seemed to be forever the nurse came out and told me the doctor wanted to see me in the family consulting room. At that point I knew something was wrong. They would not let me go see my baby. Dr. Robinson came in about 12:30 and said she thought they were going to lose her and left. She came back and told me Sierra was gone. My beautiful little girl became an angel at approximately 12:41 pm. I was in shock. About 15 minutes later the nurse brought her to me. I held her until she became ice cold. I did not want to give her back. I wanted to hold her forever. As I held her I waited for her to blink her eyes or squeeze my finger. This never happened. She was really gone. She was only 20 days old when her fight for life ended. There is not a day that goes by that I do not think of her or wish that there was a cure for childhood cancer.
+ Read More