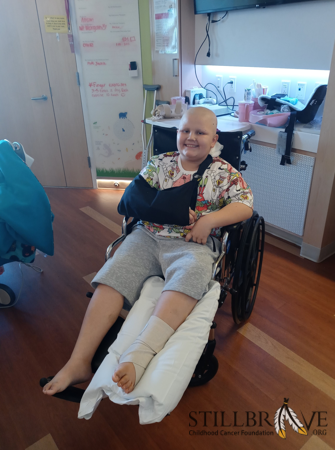 My son's name is Myles Edward Donley, he is currently 10 years old, on Myles's 9th birthday we got him a punching bag because that's what he really wanted.  After using the punching bag for a couple weeks Myles started complaining about a extreme pain in his wrist. Not only did it hurt but it was pretty swollen too. What concerned me was most swelling is soft to touch this was as hard as a rock. His father and I thought maybe it was just fractured or sprained so we took him to the ER and he got x-rays. After the x-rays the doctor came in and said they wanted to do more tests so we did an MRI. When the results from that came back the emergency doctor told me that I was going to have to schedule an appointment with the oncologist the very next day. At the oncologist appointment the next day we were told that he had what looked like osteosarcoma (bone cancer) in his radius bone of his right wrist. The Next Step from there was to go get a biopsy which we did at Lucile Packard Hospital in the Bay Area. The biopsy came back as osteosarcoma. It started them on the map protocol and he started his chemo is right away. After 12 weeks of chemo they went in to remove the tumor by doing a limb Salvage surgery by using his fibula bone out of his leg and reconstructing his wrist. After he was well enough from surgery which went well he finished his chemo treatments. On September 2nd 2021 after treatment scans came back all clear, as well as his 3 month scans all clear. His next set of scans will be on March 15th 2022. And we will be doing scans every 3 months for a while to make sure the osteosarcoma does not return.