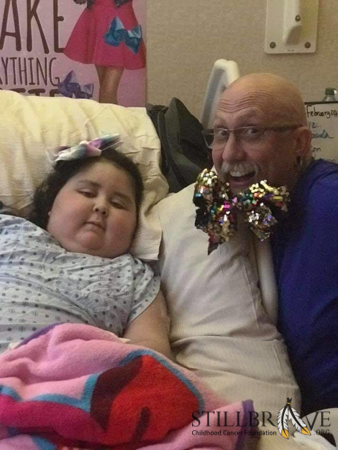 When Mikey was born I used to tell him how lucky he was because he had so many people to love him. His older brothers, Brian and Peter, helped guide him through his first years of school, camp, friendships, playing Little League, skiing, video games and more. But two days after his 15th birthday Mikey would be leading us on an entirely new adventure; pediatric cancer.
As most families, we never gave much thought to childhood cancer until we were thrust into the ugly beast. Michael was diagnosed with DSRCT, a rare and aggressive soft tissue sarcoma. After two surgeries, numerous rounds of chemo, an analogous stem cell transplant, and 22 days of radiation Mikey almost died of VOD, veno-occlusive disease of the liver. Through the use of an experimental compassionate care drug from Italy, Mikey recovered and was in remission for 9 months.
During his remission Mikey was offered a Make-a-Wish. He chose a shopping spree, but not for himself. He went to a local electronics store bought $5,000 worth of gifts and distributed them to other children in the hospital going through long term cancer treatment. Mikey saw the need to help kids “in the moment” of treatment cope with anxiety, boredom, and fear. Thus the Mikey’s Way Foundation was formed. He attended 17 Mikey’s Way Days and gave kids, and their families, some comfort during incredibly scary times.
After Mikey relapsed his cancer was controlled by several levels of clinical trials. He was able to graduate high school as valedictorian, learn to drive, fall in love, travel, and complete his freshman year at Harvard. Mikey was exceptionally bright, curious, loving, compassionate, brave and he carried his family through his illness with grace and humor.
It was a year after Mikey passed that we, as his family, found the strength to carry on his legacy. Now, with the advancement of technology, almost everything on the Mikey’s Way Connection Cart is WIFI ready and helps keep kids in long term treatment connected to their family and friends. We sometimes feel that Mikey left the Foundation for us to carry on, to give us a purpose in life.
www.mikeyseway.org