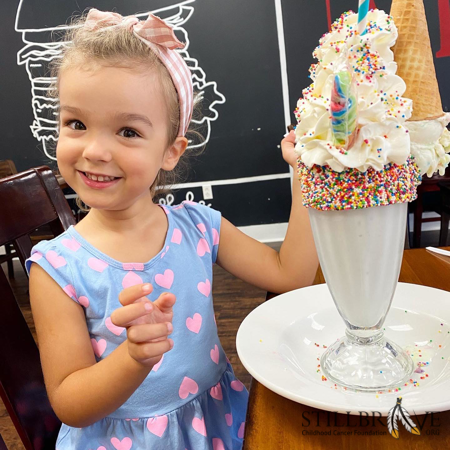 On September 5, 2021 our lives were flipped upside down when our sweet four year old daughter Ava was diagnosed with Medulloblastoma (Group 3). As you would expect it was devastating and since then we’ve been on the roller coaster of treatment. Thankfully we ended up with one of the top pediatric neurosurgeons in the country Dr. Gary Tye was right here in Richmond and he was able to fully remove the tumor and the cancer had not spread. After a few weeks of recovery, as a family we moved into the Ronald McDonald House in DC. For five days a week for six weeks straight Ava received chemo in the morning at Children’s National and then we’d head across town to Sibley for proton radiation. With her being so young and having a fluid patch at the point of her scar (which has since gone away), she was also being put under for the radiation every single day, which also meant she was fasting M-F. It was definitely a tough stretch, but we were blessed with getting a six week break which lucking coincided with the holidays. It was a much needed break for all of us. We’re currently about to head into round 3 (of 6) of maintenance chemo, which (thankfully) we’re able to do in Richmond so we’re at least at home for the most part.