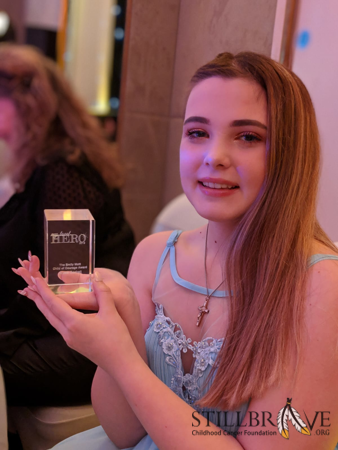 Ava’s Story: Ava Blaser is a 12-year-old competitive dancer. She has been dancing since the age of 3 and it is a passion that has helped her through some really tough times. On Father's day, 2011, just 5 days after Ava's first dance recital, she was diagnosed with Stage 5 Bilateral Wilms, a form of kidney cancer in both kidneys. Ava lost her entire left kidney and part of her right kidney. After 6 months of chemotherapy and 6 rounds of radiation, Ava was declared cancer free in January, 2012.

Ava and her family were always told after 5 years, Wilms tumor does not recur. But in January, 2018, at her 6 year out of treatment check-up, Ava's scans showed a spot on her partial remaining kidney. Tests from surgery confirmed she had relapsed, so she began an extremely harsh relapse protocol. Ava's oncologist allowed Ava to dance as long as she felt able and incredibly, she was able to continue to dance and compete during her harsh treatments, despite her doctors doubting she would have the strength to do so.

Outside of dance, Ava is a passionate advocate for childhood cancer research. She is a National Spokeswoman for Dance Hope Cure and The Truth 365. She is a gifted public speaker, traveling the country to raise awareness and funds in communities, and to speak with government officials, urging them to pass legislation to offer more money to childhood cancer research. In the past 2 years, she has aided in events that have raised over $3Million for pediatric cancer research and has also started her own campaign, along with her sister, Emma, to fund Wilms tumor research and assist families who have a child with cancer.