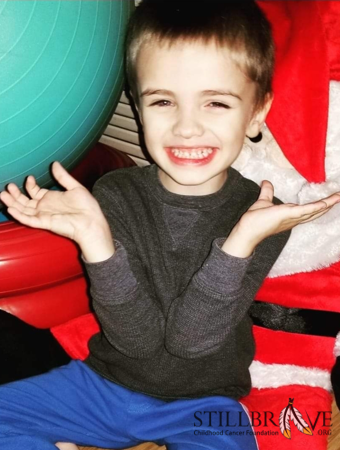 Vincent is currently 2 years old and was 4 months old when he was diagnosed with a rare, aggressive brain cancer called Atypical Teratoid Rhabdoid Tumor (ATRT). He was asymptomic and it was a miracle that the tumors were even found when they were. He had 2 tumors in his brain, one was 9 cm in his right atrium and the other was smaller and next to his brain stem. He had a 9.5 hour surgery to remove 40% of the larger tumor. We were told he had less than 10% chance of surviving. Vincent had many surgeries to place a shunt in his brain then revise the shunt, had a port placed, and then went through 6 months of intense in-patient chemotherapy. In December 2018, miraculously both tumors were shrinking and his neurosurgeon was able to do 2 separate craniotomies and successfully achieved a gross total resection of both! Vincent started maintenance chemotherapy in January. He had some physical deficits from his tumors and surgeries but had been going to rehab and was making great strides. He was beating his cancer against all odds, and not just beating it but thriving! Then suddenly and rapidly on Tuesday April 9, 2019 after receiving a cycle of chemotherapy, he developed a complication and went into acute liver failure. On Thursday April 11, 2019, we were told that we would need to start discussing end of life care. But we did not accept this and we keep pushing and fighting to get answers and save our baby boy.

Devastatingly, he relapsed on 1/22/2020 with a new brain tumor. He had another craniotomy on Feb 6, 2020 to remove the tumor and just started chemotherapy again. He is fighting for his life a second time.

Below is his story and you can learn more at www.facebook.com/vincenttheconqueror