Mile #11 in honor of JaMari 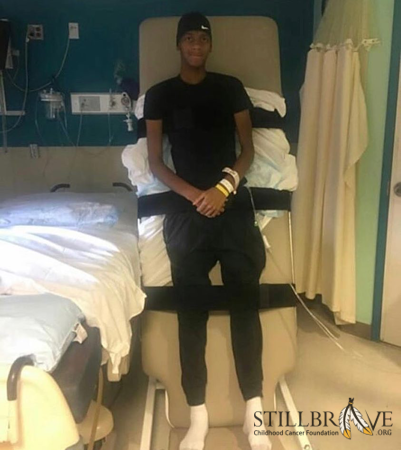 JaMari enter the world as a fighter, born a premie, with a few health problems, being a fighter he would overcome his health issue’s as time goes on he grows into very smart and witty kid, we gave him the name Bird, because of his small size, thinking that he wound fly away. As a toddler his favorite thing was a ball of any type, and being outside. Everyone was crazy about this kid and well known in his neighborhood. By the age of five, Bird started showing his athletics ability, he sign up to play flag football, and he loved it. Once football was over he started basketball again he showed his love for it. He is now talking about being a pro athletic, next he plays baseball, and Bird didn’t show a big love for it. So it back to football, tackle this time and he’s the quarterback, it was a tough position and he loved it even getting sacked. Football is over and back to basketball, this season Bird shows his new skills and the coaches flip out, also he starting to grow tall, his famous words are my Doctor said I am going to be very tall, and he did do. Basketball is his new life sun up and sun down, playing for AAU team’s local teams and later JV basketball and moving up Varsity basketball season 2017/2018. Birds dream was placed on hold, in November 2017, he stated complaining about his right leg, after a fall in practice, his coaches informed us that the leg gave out on him, and the fall wasn’t from any of his movements. To the ER we go to have him look at. They didn’t find anything he was send home. We didn’t let practice for week, He said he was feeling ok, well a week later he fell at home back to the ER, this time no movement and feeling his legs we demand that they keep him, Baltimore Washington Medical, transfer him to University of Maryland Medical Center Baltimore MD. December 4, 2017 two tumor was found on his spinal and removed, December 6, 2017, Bird was diagnosed with Alveolar Rhabdomyosarcoma stage 4. I tell Bird if you want to cry, be upset or afraid, its ok, but pop pop isn’t going to do any of that, I sit beside him and pull my phone and show him all the athletics that had cancer and movie stars that he knew, they are still playing, he smiled, I asked him are ready for this journey, he said yes. After that conversation he never cried again. On December 25, Bird stated having seizure, cancer cells has enter the brain, Dec 26, Bird starts radiation to the head. He did very well, still happy go luck. Jan 30, 2018 he goes to Mt. Washington Pediatric for rehab, this kid is fighting this breast! April 20, 2018 I notice his mental state isn’t right, I requested that Bird be exam, they do MIR, CT, PET, and found cancer activity in the again. Leptomeningeal Metastases. May 9, 2018 we make plans to move Bird to Hospice, on May 11, 2018 Bird and I have a conversion, Bird say to me pop, I am starting to get scared about this whole situation the cancer and what the Doctors told me, my reply to Bird, remember we talked about if you see Jesus, and if he ask you to come with him or take you by the hand are you still willing to go with him, Bird said yes, I then tell Bird that Jesus will take of you and make everything better. We smiled and talked about sports.

Bird passed May 23, 2018.  Bird was funny and lovable by all that knew him, very smart, grow folks enjoy sitting and talking with him, loyal to his friends and classmates, teammates, and love his little brother and two sisters. Very easy going and never a problem. My favorite story about Bird is we loved riding around Saturday trying out new restaurants and just being with each other and talking about life. Doing his journey he never complain about anything.  When Bird said this to me, I knew he was ready to be JESUS.

SOMETIMES YOU HAVE TO TRUST THE PROCESS!!