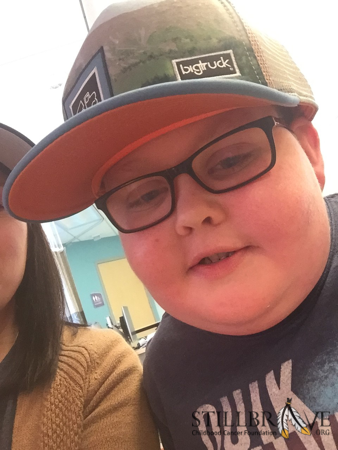 Tennyson was born with Kabuki Syndrome… which caused his life to be full of surgeries, therapies, hospitals, doctors and meds. Part of his syndrome was an autoimmune bleeding disorder called Evans Syndrome. His body destroyed his own blood cells… leaving him in life threatening conditions most of his life. Doctors were not able to control it by typical means (they suspect because of his genetic birth defects), So though Tenny did not have cancer initially, over a decade of his life was spent receiving   chemo therapies, blood and platelet transfusions and other infusions through his port, trying to control his anemia, neutropenia, and his bleeding.  Though Tenny was physically and developmentally disabled, standing at just over 4 feet tall, he was larger than life.  He loved everyone and everyone loved him. He was pure joy to be around. Fall of 2020, I could tell something was wrong.  After almost 15 years of caring for Tennyson I had become pretty in tune with the ebb and flow of his health.  Though he was followed by doctors on a weekly basis, his cancer was overlooked for a couple of months, thought to be a side effect of some meds and a chronic sinus infection. January 4, 2021 my sweet Tennyson was most unfairly diagnosed with Stage 4 Lymphoma. It has spread throughout his body and invaded his lungs. That brave boy found the fiercest final battle he was asked to face… passing away on Feb 22, 2021.  As we approach the year anniversary of his passing, it is sweet to me to mind someone toHonor him. Thanks you thank you. Jana Hunter.