Mile #108 in honor of Christopher 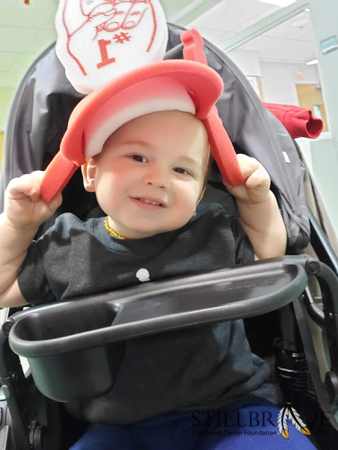 Christopher Cramer was born November 27th, 2018.  Six short months later, he was diagnosed with a brain tumor.  Doctors at our local hospital were stumped on how to help our son.  Not giving up on our son, we called other hospitals to see if they could or would help our son.  After several unsuccessful attempts, we got the call while we were fulfilling Christopher's bucket list that St. Jude would accept his case.  A few short days later we were headed to Memphis, TN were a team of doctors felt they could help beat this monster.  During Christopher's treatment, anything thing that could go wrong, went wrong.  From infections in his line, reaction to blood transfusions, and coding and having to be intubated.  Those were some really horrifying times.  After 6 months of chemo, Christopher was declared NED.  We returned home after the new year of 2020.  Routine MRI scans every 2 months showed Christopher was still NED.  Sadly, in July 2020 during a scan, cancer once again reared its ugly head.  Hopeful for another plan of action, Christopher's team at St Jude did a trial with a new medication.  With the medication came new concerns, but his scans still showed no signs of the cancer.  We were able to come home to celebrate Christopher's 2nd birthday and Thanksgiving and would head back to St. Jude the beginning of December.  That time, we were told what no parent ever wants to hear...there were no more options left for Christopher.  Christopher laid down his sword after an 18 month battle with Glioblastoma Multiforme on December 21st, 2020.  Christopher's smile and giggles are truly missed, but we know he made a large impact on others in his short 2 years of life.