Mile #7 in honor of Brendan 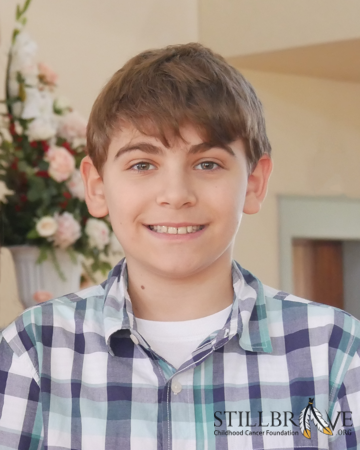 Brendan was diagnosed with a brain tumor called a Pineal Parenchymal Tumor at 7 months old. He had 4 rounds of induction chemo, resection surgery and 3 rounds of high dose chemo with stem cell rescue.He had many setbacks including one trip to the PICU where we signed a DNR. His journey was tough and we did not know of we would be able to bring our baby home until we were finally released to go home.

On the day he turned 17 months old, he had his after treatment scan which showed that the solid tumor was gone.  We had 21 months of freedom before a routine MRI showed that a new tumor had grown in the same place as the original tumor. He was 3 years old. The treatment for the reoccurrence was tough. He did 2 rounds of a chemo protocol called ICE. He became incredibly sick after both rounds. After the 2nd round, an MRI was done and proved what we had suspected, the tumor had doubled. Chemo was ended and we waited for the next step. During that time, Brendan's tumor was growing and his cancer was progressing. It was decided that another risky resection surgery needed to be done immediately. This surgery would be more complicated because some of the tumor was wrapped around optic nerves and veins. The surgery was successful and 95% of the tumor was removed. Because of his age with the original tumor we were not offered radiation. However, with the 2nd tumor we were referred to a proton radiation clinic for 30 days of radiation. After 7 weeks we were done. One month after treatment ended, Brendan had an MRI that showed that once again the solid tumor was gone.

We have reached 3 years off treatment. Brendan is doing great. He has neurological and developmental delays, but he is seriously the sweetest kid.