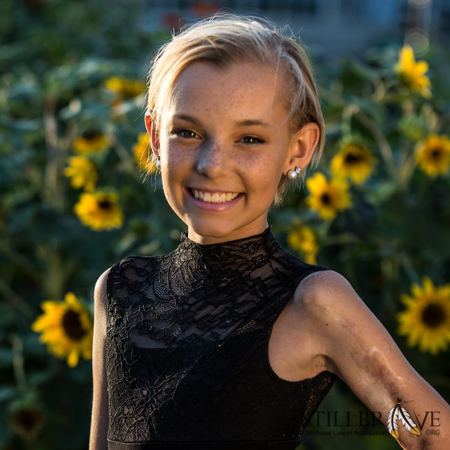 Lily Constance Weaver was diagnosed with Ewing Sarcoma at age 10.  Lily started out with some arm pain in her left arm.  We honestly thought it was due to her new love with all*star cheer and her daily cheerleading and gymnastics practice.  On August 5, 2012 our breath was taken away when our local orthopedic doctor told us that she thought Lily had a mass.  The following year was full of chemo, hospital stays, pokes, a stem cell transplant, MRI's, scans, doctors, etc.  Life had changed.  It was such a challenging year but we had our eye on the prize to hear the words NED!  And we did, we heard no evidence of disease, scans are clear, we will see you in 3 months, 6 months, finally in April of 2017 we heard the best words ever...we heard...see you in a year.  Lord, we were blessed.  It seemed as though our "Birdie" had beat the odds, and she was officially cancer free.  However, that was short lived.  That late July early August, Lily had some new pain.  Because she was a "survivor" we were sure her back pain was due to playing on the beach for hours, or maybe the beds at the beach, but it wasn't cancer.  We were wrong.  Ewing Sarcoma was back.  We were back to day one, except this time, we knew what we were up against.  This relapse may have hurt more than the original diagnosis.  Lily was now a junior in high school and was going to miss another year of school and begin another year of chemo, hospital stays, pokes, scans, doctors, and this time add 30 days of radiation. Her spirits were high and she was ready to battle again.  That year Lily continued her work with Truth 365, became extremely close with her nurses, and lived life to the fullest.  That June Lily was once again declared cancer free.  We learned as a family to celebrate each day, everyday and we did!  Lily was entering her senior year and was excited for the future...she had college, sororities to join, vacations to go on, all of the normal teenage fun activities.   We couldn't wait for it all.  May 9, 2019 was an extremely daunting day.  Literally two days before Lily's senior prom, we found Lily had relapsed yet again.  Not sure how this happened as she was still taking an oral chemo med all year but it was true.  It came back and we knew our odds were not in our favor.  The next 7 months Lily fought hard.  She continued with chemo and 6 weeks of radiation.  She had a month long stay in the hospital from her first chemo being way too much for her.  Lily was in a lot of pain these 7 months.  It was challenging to witness but her spirit was still so strong.  December 13 Lily and her dad flew to Vegas to see Ariana Grande (Lily's favorite!).  She was so excited and even began to vlog that day.  That weekend though things starting to fall apart.  They flew home December 16 and we met them at the hospital.  Lily's body began to shut down on her.  That Friday, December 20 at 11:30 am our Lily lost her courageous fight.  She left behind both mom and dad, her older sister Grace, and her younger brother Frankie.  Our hearts are still broken and we will never be the same.