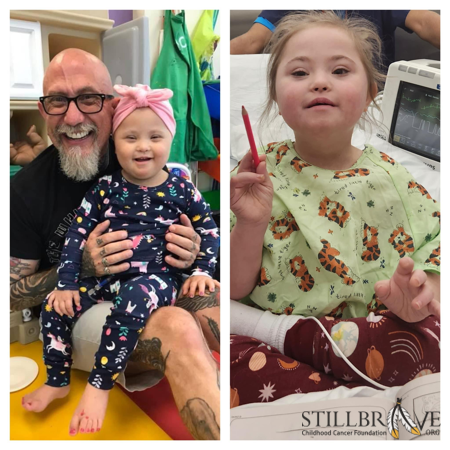 Landon was diagnosed with Stage IV High Risk Neuroblastoma on February 21, 2015. He was 3 years old. The cancer had metastasized to his bone marrow and his entire body was invaded. The doctors told us that he had a 20-30% chance of survival at diagnosis. He endured 6 cycles of induction chemotherapy, tumor resection surgery on June 29, 2015, an autologous stem cell transplant (his “re-Birthday” is September 8, 2015), after 29 days inpatient on the Bone Marrow Transplant unit, he had a few weeks of recovery and went right into 12 days of radiation (due to his age he required anesthesia every. single. day. of radiation) and finally he completed treatment with 6 months of antibody therapy to “train” his body to basically seek and destroy Neuroblastoma cells (nothing can prepare a parent for the evil effects of this antibody therapy). After all this however; I’m happy to report the doctor declared him officially “in remission” on July 2, 2016! He’s 8 now and thriving. He’s not totally free from the effects of treatment: he has severe hearing loss/hearing aides and he has severe tip toe walking so he’s going to have tendon extension surgery in April, but he’s here. And we are forever grateful.

Thank you Tom for EVERYTHING you do for our little warriors. I’m one of your biggest supporters and I’m SO very proud of you. We would be honored if Landon could join you for the 5th year in a row as you face this next adventure.